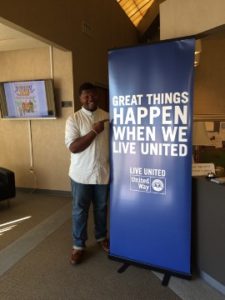 Cameron dropped out of high school at age 16 during the 10th grade. There were sensitive issues that led up to this occurrence. He had changed schools after a move and situations arose that resulted in him dropping out of school. During this time, Cameron’s life events led him to decide to pursue his GED which led him to Anderson Adult Education and Palmetto Youth Connections (PYC). Cameron also had great family support to stand behind him to make this goal possible. PYC was and is honored to be a part of his successes. His family support along with PYC was what really got him motivated to complete his GED and further his career goals. PYC was there to support all goals and assist Cameron as he earned his GED.

While Cameron was pursuing his GED, he was also working on skills leading toward employment and furthering his education. He upgraded both his reading and math skills making progress in math while bringing reading up two levels. He also completed Career Smart classes and also earned a certificate in Hospitality Support Services. Cameron was placed at the United Way of Anderson County for Work Experience training. He stated that he is grateful for the Work Experience training that he has gained so much from the training and enjoys the professional environment. He has a better understanding of our communities needs and his desire for helping people has increased. Work Experience training helped confirm for him that he wants to pursue a medical career. With the assistance of PYC, Cameron earned a Nursing Assistant certification through Tri County Technical College and plans to pursue a Physician’s Assistant certification to further his career options.

After completing his Nurses Aid certification, Cameron was able to secure a Nurses Aid position and full time employment at Clemson Downs. Cameron states that he is grateful for the assistance he has received from PYC and he appreciates the added support made available to him. PYC is proud of Cameron’s accomplishments and honored that we were able to support him while he is pursuing a productive and successful life for himself.